Daisy Boman grew up in the Flemish part of Belgium, near Antwerp. Even as a child drawing was her favourite pastime and this eventually led her to enter the Academy of Fine Art, where she studied interior design and photography. She then proceeded to experiment with ceramics, and the new possibilities that this medium offers inspired her to go still further. In 1981, her husband was offered an exciting opportunity to work as an architect in South Africa and the couple moved to Johannesburg. There, Daisy was selected for the National Ceramic Exhibition several times, and her work and the ideas behind it matured, strongly influenced by social aspects and characteristics of South African society during Apartheid. After five years, Daisy returned to Belgium in 1986 and her first exhibition in Antwerp, a year later, "still had an African influence". Continuing to push her skills further, Boman exhibited in Belgium, the United Kingdom and the Netherlands. She's also distributed her works widely all over the world with her pieces being a part of a selection of private and public collections within the Netherlands, the United Kingdom, Germany, France, Canada, Hong Kong, Australia, New Zealand and in the United States. Boman has additionally made TV appearances on Belgian television and has had her pieces featured in a variety of magazines including 'Art of England' and 'Fine Art Collector'. Finally, her 2010 piece, "We Will Find A Way" was selected for the luxury liner 'Nieu Amsterdam' as a reflection of the country's sculptural style.

Daisy Boman created her 'bo-men', unique figures that climb, interact with each other, fall, crawl and run. Alone, but mostly in numbers, they tell stories about life, human destiny and universal feelings. Their language is unique. Faceless, they ask us to look at them for what they are rather than for what they look like. Their movements, situations and attitudes speak for themselves and personally to the viewer. Boman's sculptures experience life, with a playful and challenging attitude but also in even more dramatic fashion. They race, try hard for something better, make choices, and carry the burdens of life. Their uniforms are white because colours and races should not matter, their heads are square as we are all "from the same mould," conditioned by the society we live in. They can make you smile, but look closer and you will quickly discover how serious they are. It all starts with a sketch or a drawing, but the final piece is often quite far from its original idea. Daisy shapes her diminutive people by hand, and then allows the clay to dry in open air. In due time, they will be fired in an oven at high temperatures. When they are ready, they are selectively mounted on the board, where they suddenly take on a life of their own. Daisy will choose their fate; they will be placed alone, in the chaos of a whole group, running on the front line, getting stuck behind or reaching the top. Daisy says she listens to her little Bo-men, who show her where to go! 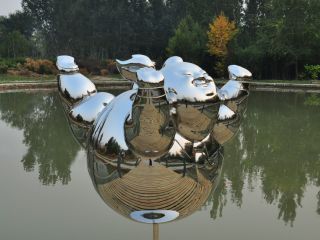 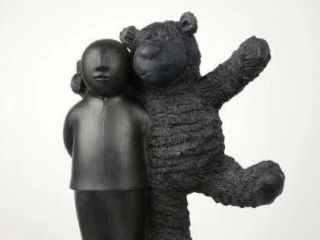 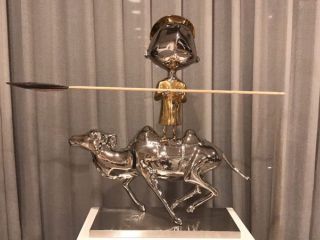