Rujiman
Rujiman was born in 1975 and graduated from the School of Fine Arts in Yogyakarta. He currently stays in Indonesia. Known as the 'Koi Fish painter', Rujiman's abstract oil paintings are heavily impasto-ed, which adds great energy to his subject matter. He transfers the movements, color schemes and implications of Koi fish from his memory onto canvas using a pallet knife, and captures a style that spans abstract to semi-abstract to Impressionism. The artist has shown much cultural achievement as a fish painter and is skilled in connecting aesthetics with Asian philosophy. He is highly recognized in Indonesia and is rapidly gaining popularity for his style.

Rujiman was born in 1975 and graduated from the School of Fine Arts in Yogyakarta. He currently stays in Indonesia. Known as the 'Koi Fish painter', Rujiman's abstract oil paintings are heavily impasto-ed, which adds great energy to his subject matter. He transfers the movements, color schemes and implications of Koi fish from his memory onto canvas using a pallet knife, and captures a style that spans abstract to semi-abstract to Impressionism. The artist has shown much cultural achievement as a fish painter and is skilled in connecting aesthetics with Asian philosophy. He is highly recognized in Indonesia and is rapidly gaining popularity for his style.

The Koi Fish Painter
Rujiman began his painting career experimenting heavily with many mediums ranging from fabric to glass. As for his choice of subject-matter, he explored various flora and fauna, as well as spiritual objects and concepts. In 2001, he fell in love with painting Koi during his visual adventures within the animal kingdom. Presented with many opportunites to exhibit at various art festivals in Indonesian cities such as Yogyakarta, Jakarta and Surabaya, as well as overseas, his fish paintings gained much recognition from the artistic community.

Often, it is asked: why has fish become his subject-matter in every canvas?
A famous Chinese painter who stayed in Indonesia during the time of it's independence and also painted fish was Lee Man Fong. For Sukarno, the first Indonesian president with whom Lee had a close relationship, Lee's paintings were an opportunity to escape from the spirit of revolution. Agus Dermawan T, a fine art critic, stated that "the fish is the symbol of 'abundance' in relation to the material... a symbol of luck." From this, we can draw similar conclusions as to why Rujiman chose to paint Koi fish.

However, for Rujiman personally, he expresses the realistic objectification of fish as a symbol of the disclosure of his ideas or the expression of his soul. For him, the fish is an artistic object and exciting to paint. A group of fish in the water looks artistic from every point of view: visually, shape-wise, colour-wise and especially regarding their movements, which make them seem so dynamic.

Today, both artists and collectors recognize Rujiman as a specialist in Koi paintings, a title of cultural value received by Rujiman due to his consistency in the subject-matter. As such, his work has been collected by Oei Hong Djien, a famous Indonesian collector. Few Koi painters express such consistency and talent for their subject-matter, and it is perhaps for this reason that Rujiman has managed to successfully establish himself as a Koi painter.

The History and Myth of Rujiman's Fish
In the book of 'Han Akhir' (Hou Han Shu), there is a story that tells of a waterfall with a particularly swift current in the Yellow River. Fishes tried hard to climb the waterfall, but only Koi that successfully reach the top could be transformed into dragons. This success has become a symbol of prosperity in life. Due to the fact that the myth of the Koi exists in several communities, the Koi is considered to be a universal symbol of luck. In each painting, the number of fish similarly correspond with lucky numbers in the Feng Shui philosophy.

In Rujiman's artistic development, he has replaced his naturalist visual language with surrealism, and finally, abstract figurative. In his early phases of painting, the Koi was often visualized in a pond habitat and tended to lean toward a naturalistic representation, whereby the object was painted realistically and emphasis was placed on the natural background. This sociological conformist style of painting the Koi in the pond reflects a similar idea of having a painting as part of one's house decoration.

In 2009 to 2010, Rujiman left the realm of naturalism. By painting Koi in symbolic relationships with Buddha, fish were adventures into the spirtiual world, through a path led by surrealism. In fact, he visually described the day after doomsday through the physical evolution of Koi fish, representing dreams, illusions and fantasies of fish as life journeys. For Rujiman, spiritualism is a metaphysical entity born out of rationality. Spirituality is a mysterious world, that can revealed only by way of surrealism. At this stage, the fish in Rujiman's paintings are a combination of peculiarity and metamorphosis.However, his latest fish paintings, have lost their naturalist and surrealist languages. He now leaves his brush behind and creates his gesturally impressive fish from quick strokes of a palette knife, shaping the texture with incisions of strong colour and light.

Latest Work: Images of Textural Fish
Rujiman's fish are always painted from the aerial view, positioning us as an observer and allowing us to observe them as textural objects in our minds. This is distinctively different from the naturalist who observes the fish as exotic objects and the surrealist who observes them as a spiritual dream and fantasy. This growth reflects Rujiman's spirit that constantly seeks to be challenged by technique and artistic quality.

In his latest paintings, there exists not only the fish mythology, but also Rujiman's artistic power which is displayed in his choice of vibrant colour polish. His textural concept employs colour not just as a pigment, but also an expression. Paintings which use textured surfaces gives a sensational experience, creating rhythm of movement and visual palpitations. As a result, the fishes never appear flat, but are dynamic. Rujiman's fish paintings emphasize the artistic power of sensation and allow us to ruminate upon the myth of luck. Hopefully, through this method, Rujiman will no longer be marginalized as an artist and instead, enter an artistic zone where his paintings will be understood and heavily sought out as collector items. 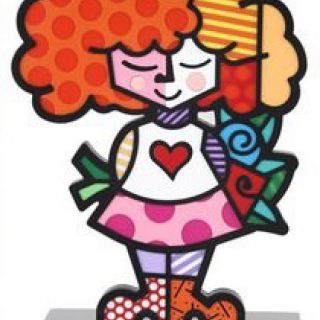 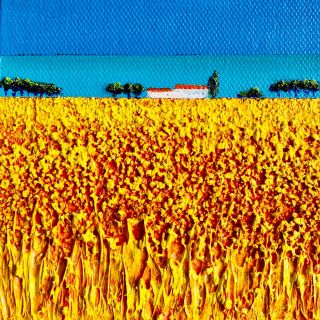 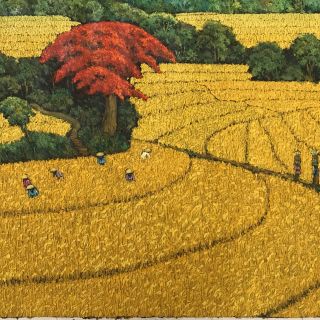 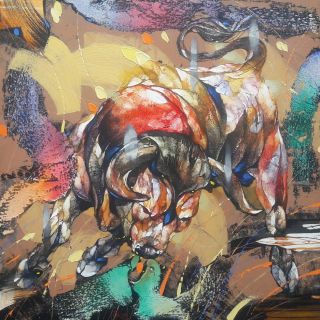 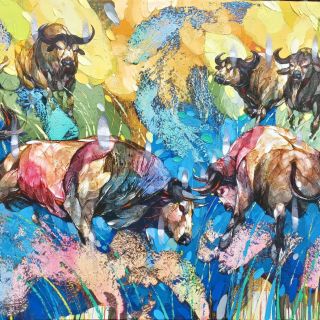 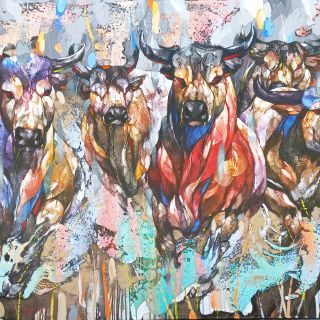