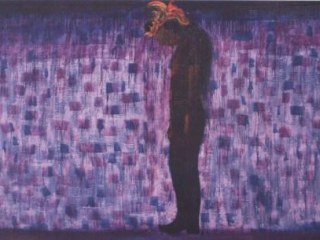 (A) Nasirun’s biggest motivator in his art is his spiritual beliefs, Islam. He believes that painting is a spiritual action. Born and brought up in an Islamic family, he meditates and practices his faith through the means of his art. His spiritual struggles are the inspirations behind his works, making them a reflection of his own personality and emotions. He even integrates Arabic and Latin words into his painting occasionally, regions where Islam is prevalent. The influence of Islam in his paintings is evident; it may be in form of the words added onto the canvas or the manner in which characters are portrayed.