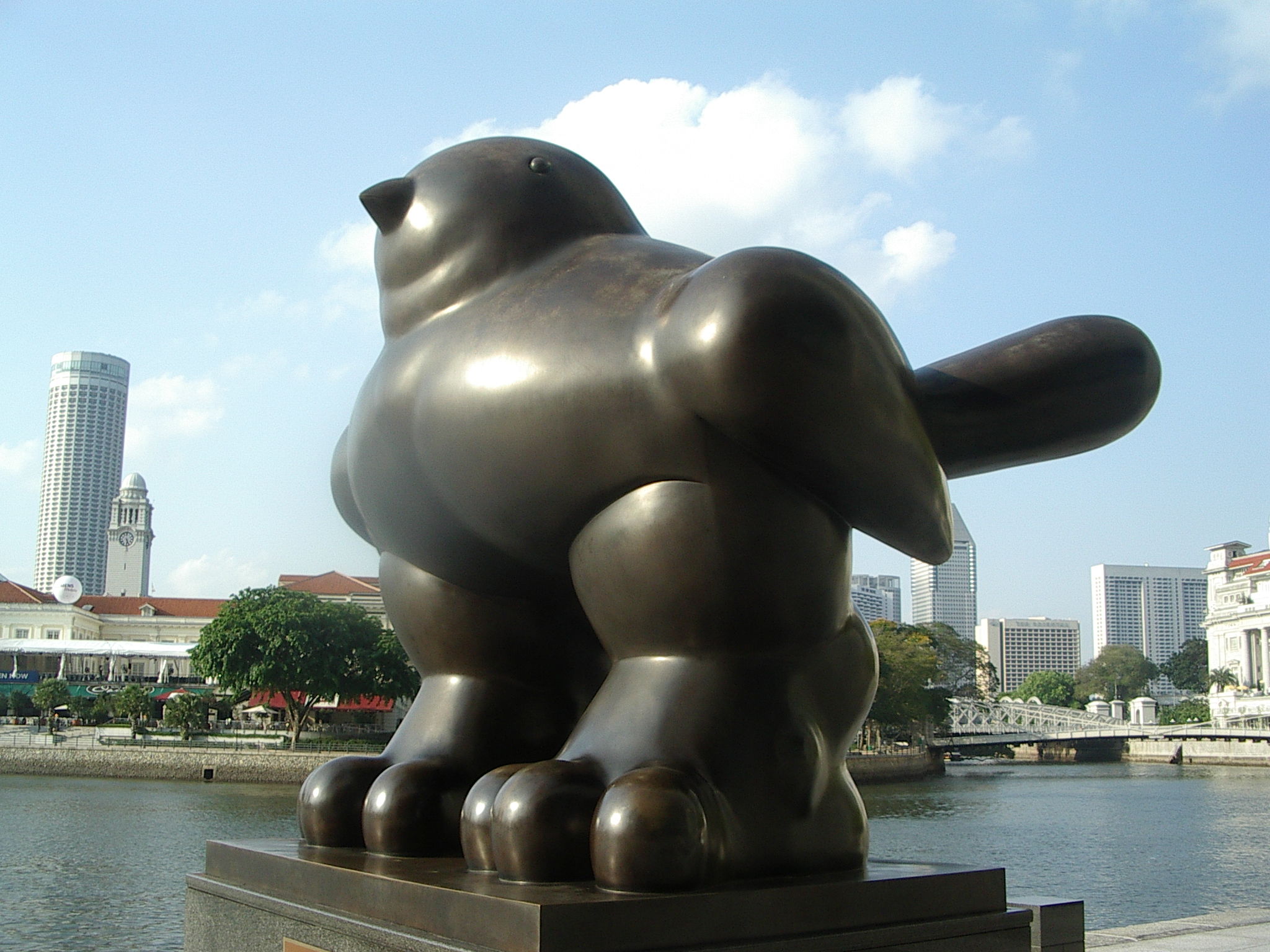 The Wonderful World of Volume: Botero and Form

You are reading The Wonderful World of Volume: Botero and Form
Share

Share
By Xin Yue
How do we see? The notion of perception has been a muse for generations of artists. Questions like why we see things the way we do, and what makes us see them as such have been a pertinent area of focus and exploration. Of course, there is no one way to see things – the different experiences that characterize each individual shape their opinions, worldview, and outlook in life. For Fernando Botero, this notion of perception, when taken into his own hands, assumes the form of curvaceous and volumetric perspectives.

Known as the “most Colombian of Colombian artists”, Botero explores traditional themes such as the history and culture of his home country. The artist, renowned for his distinctive volumetric figures, creates works with his signature style, Boterismo.

Born in 1932 in Colombia, Fernando Botero depicts sculptures and paintings with curvaceous proportions, all of which carry an almost humorous element. His art combines the vibrant folk themes that are characteristic of Latin American art while paying a tribute to the sensitivity to form present in the Old Masters’ work. While staying true to his heritage, Botero has also invented a unique style that is undeniably his own. 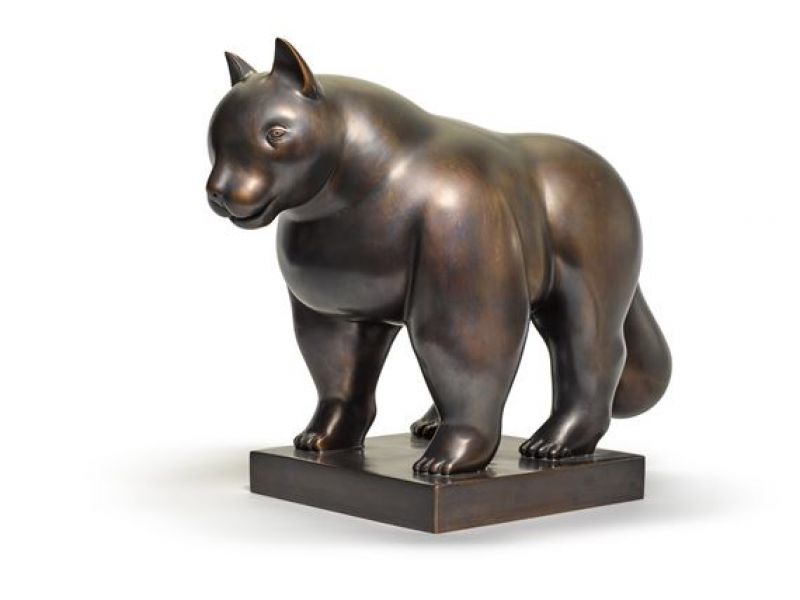 In this piece, Botero depicts a cat in his signature bulbous, volumetric form. What may have been familiar to us now requires a double-take when trying to identify the creature; its features have been exaggerated such that it resembles almost a powerful, muscular puma. Carrying a humorous undertone, Cat stands proudly on all fours on top of a flat pedestal that is almost a jab at how we conventionally would perceive things. 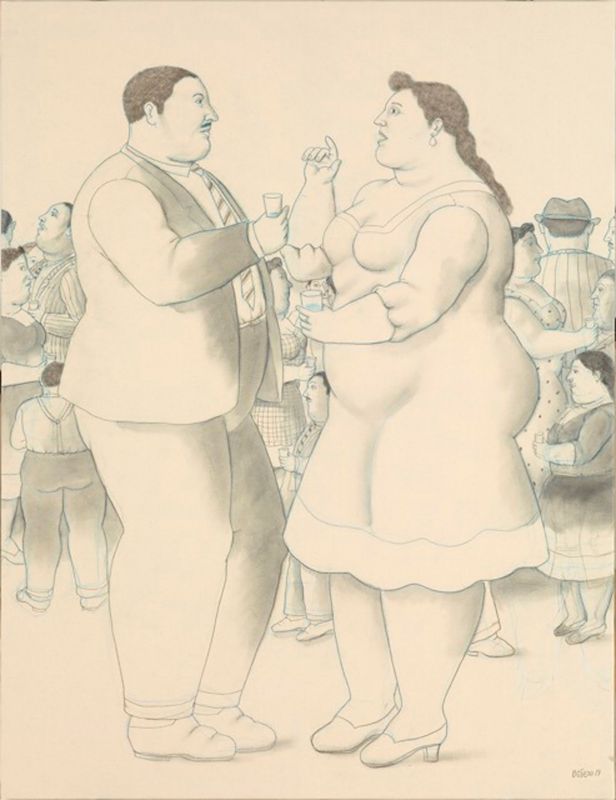 In The Party, Botero draws a rotund pair having a conversation in what seems to be a social event. All the figures in the work possess his trademark voluptuous form. A piece that has an almost complete absence of sharp edges, The Party evokes a sense of calmness and joviality both due to the sensuality of forms and the subject matter.

Wanting art to ‘be an oasis, a place or refuge from the hardness of life’, Botero’s works are oddly peaceful and do not focus on shock value. 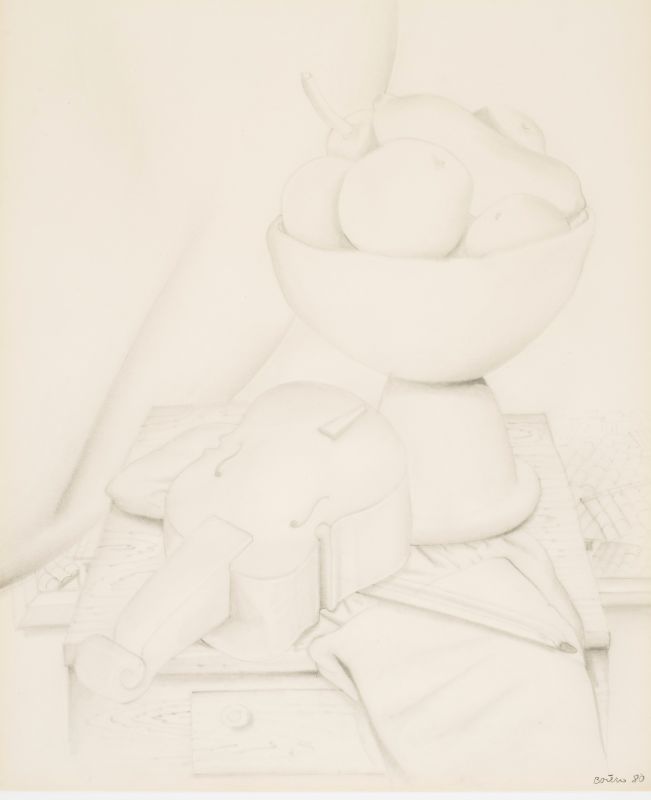 Botero is also known for his still-life drawings. In Still Life, he depicts a bowl of fruits and a violin on a neatly arranged table set up. Once again, instead of choosing traditional techniques to depict their forms, Botero overlays his subject matter with his signature veil of roundedness; from the edges of the table to the violin and fruits, every inanimate object has smoothly curved edges. Additionally, these objects are portrayed with exaggerated volumes; the violin’s width seems to be twice its original one, and the bowl has a base that suggests a larger-than-ordinary volume. The viewer is hit with a sense of peace as they look at the work, as there are no distracting features or harsh lines and edges, only light lines that serve their purpose of enveloping these forms in their bare essentials.

For Botero, he does not seek to distort reality but portray an alternate version of it. Just as his human figures should not be seen as ‘fat’ but instead ‘voluptuous’, the way we perceive things are highly influenced by how the things we see are portrayed. By recreating figures or inanimate objects with interesting volumetric forms that go beyond how we usually see them portrayed in paintings or sculptures, Botero subverts our notions of how a thing can be depicted, ultimately providing us with a different perspective of looking at the world.

Browse more of Botero's works here, or get in touch with the gallery today for more information. And don't forget to follow us on Facebook and Instagram for daily art updates!