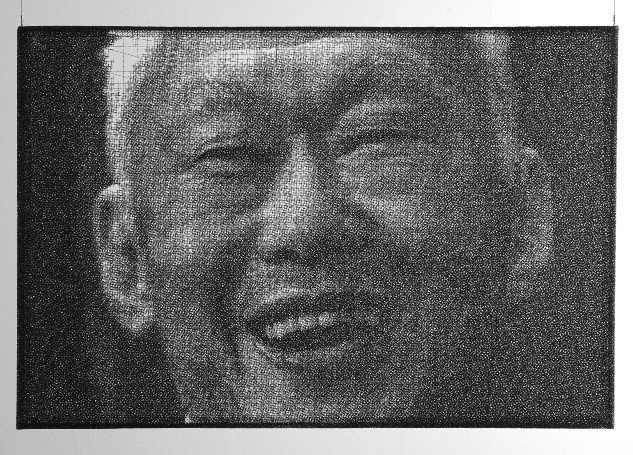 With flawless technique, Park Seung Mo uses overlapping wire layers and applies a subtractive method where he cuts away strategic locations to provide an illusion of depth and dimensionality. He depicts the figure of Mr. Lee Kuan Yew (1923 - 2015), who fought for self-governance for Singapore from the British, engineered a merger with Malaysia and then led Singapore to its independence in 1965. Representing the birth of a nation and transformation of a fishing village into a first-world modern metropolis, Lee Kuan Yew is immortalised in the wire mesh portrait of Park Seung Mo.

Born in Korea in 1969, Park Seung Mo graduated from Dong-A University with a Bachelor of Fine Arts in 1998 and is based in Brooklyn. He explores fundamental ideas through the use of forms, creating large ephemeral portraits by layering frames of wire mesh together and cutting through the layers to create depth. Each work begins with a photograph which is superimposed upon the overlapping layers of wire with a projector. He then employs a subtractive technique of snipping away areas of mesh and netting. Each piece is several inches thick and the plane that forms the final image contains spaces that are a few finger widths apart, which contribute depth, movement and dimensionality to the portraits.
In works such as Mong-hwan (Fantasy), Hwan-sang (Illusion) and Hwan-myeol (Disillusion), Park speaks of ‘hwan’ or fantasies and visions that feel as if they were real. He turns these fantasies into visual illusion of wire and explains “what is important for me is showing the audience the moment where the boundary between the real and the illusion break down.”
Go to Park Seung Mo's profile   ›
Shop other works from Figurative Renditions
Sort