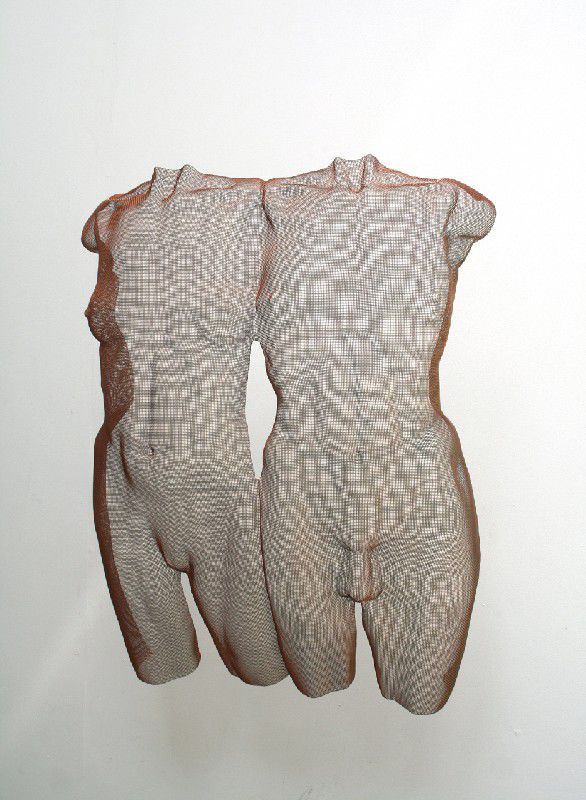 (Female Front Male Front.) British artist David Begbie is fascinated by the way light falls on the human body, and seeks to re-create this phenomenon in a highly illusionistic way, by playing with the intricate relationship between the eye and the mind. David’s use of red steel mesh adds a captivating dimension to this work, highlighting the curves of the bodies, and furthering the sensual nature of his sculptures. His work is quite unlike anything else done at the present moment, as he shapes mesh with his hands to produce the illusion of rippling musculature, making it seem as sensitive and pliable as wax. Light both ripples on this surface and passes right through it, and every time the viewer shifts position a new set of relationships appear, creating an effect that is of a presence that is not quite of this world. It is real, but also surreal.

Born in Edinburgh in 1955, David Begbie has shared his unique vision in numerous exhibitions across the world, including Italy, France, Monoco, Canada, The Netherlands, United Kingdom, Austria, Germany, USA, Australia, Japan and Spain. His robust and deceptive sculptures are created by David coaxing the figures from steel mesh with his own hands, creating a dual aesthetic with shadows and light. Globally acclaimed, the artist’s works are found in a multitude of prestigious museum collections and public art installations around the world and have also been commissioned for various established corporations.