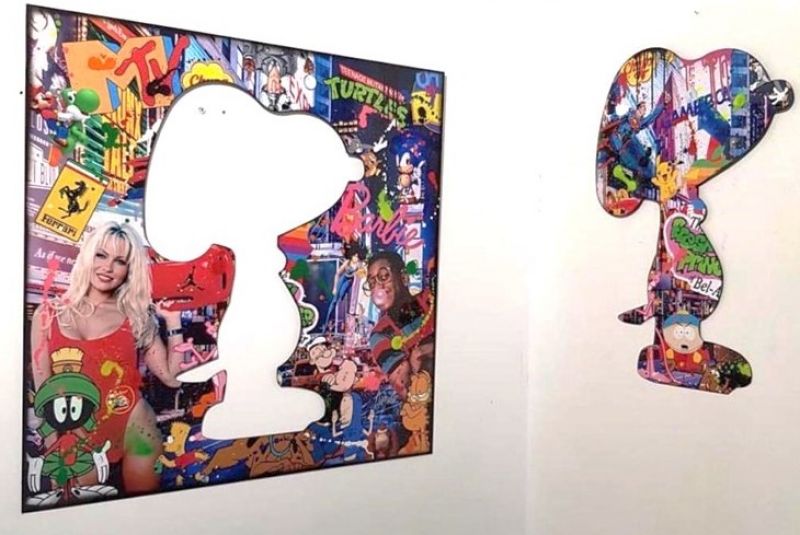 The enigmatic French artist Auguste is known for his colourful contemporary Pop Art-inspired and nostalgia-evoking works, which feature iconic figures and symbols of pop culture. This piece, titled ‘Snoop is Art’, features an amalgamation of various pop culture symbols, including Pamela Anderson in Baywatch, the Barbie and MTV logos as well as Popeye the Sailor. Additionally, a silhouette of beloved character Snoopy is placed beside it, which also features images of familiar icons. The detachment of ‘Snoopy’ from the pop culture assembly signifies the character’s perennial and extraordinary impact, such that it stands apart from other characters that have existed, while the remaining space in the shape of the iconic dog further emphasises his ubiquitous impact as the character’s ‘missing’ presence is still felt.

Born in 1977, French artist Auguste hails from the famed Bordeaux region of France. Though he studied disciplines other than fine arts, Auguste always felt compelled and drawn to the art world. Ultimately he followed his passion for the visual arts, finding his unique artistic vision and voice and is now known for his colorful contemporary Pop Art-inspired and nostalgia-evoking works.
Auguste terms his oeuvre “Generations” as his works revolve around a central theme of pop culture icons from the past. Conjuring memories of previous eras, his pieces depict celebrities, super heroes and other iconic figures, in conjunction with American and French marks to provide the viewer with a reminiscent glimpse of past epochs.
Go to Auguste's profile   ›
More works by Auguste
Sort