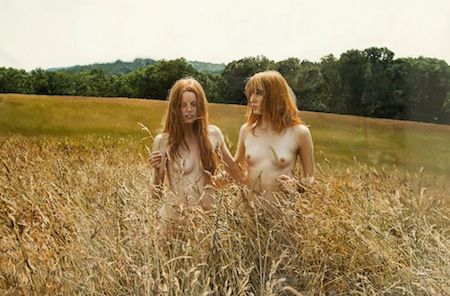 Jessica and Jana in the Field
Acrylic on Paper, 67 x 94 cm

New York-based artist Yigal Ozeri has continued to take hyperrealism to the next level that it is often hard to believe that his works are not actual photographs. Even up close, the details look fine and polished, reminiscent of a printed image; however, there is an obvious energy that emanates from the canvas that one cannot attest to with a simple photograph. Capturing solar flares, dreamy lighting, and contrasting color tones, Ozeri's art captures a moment so flawlessly that it makes one wonder if a brush had ever touched the canvas. The artist aims to capture the spirit of freedom through his paintings of figures and landscapes, seizing their spiritual beauty and not physical beauty. With the help of self-directed models, he captures his models' spontaneous and candid expressions, making his scenes authentic.

Born in 1958 in Tel Aviv, Israel, New York-based artist Yigal Ozeri takes hyper-realism to the next level. It is hard to believe that his work isn't an actual photograph. Capturing solar flares, dreamy light and contrasting color tones, he shows just how far he is willing to go to capture a moment. Ozeri's aim as a painter are nothing short of idealistic - in the most reverent sense of the word. To him, the figures and landscapes that he paints capture the spirit of freedom and, aided by technique and process, they seek to express true reality. To help capture authentic human experience, Ozeri does not use professional models only. Instead, he paints social wayfarers and other personalities on the fringes of society that he meets through friends. According to Ozeri, his fascination with the women he paints does not stem from a desire to possess their physical bodies, as much as from a desire to convey their spirit. He spends a long time with his subjects, becoming intimate parts of their lives and even friends of their families, until he is ready to shoot. Though Ozeri directs his crew at every stage of creation, he never directs his models. He describes his method, "I said, 'OK, I'll take the camera, and I'll let you do whatever you want,' and that's how we did it. It was very playful. They did what they wanted, what they felt, and it was great. I used a long lens from far away and took thousands of photographs." Yigal Ozeri has grand intentions for his paintings and for art in general. He sees his work as enacting social change, educating audiences by allowing them to experience the antithesis of death and violence. He wants the world to be a better place and sees art as integral to that process. However, no matter how hard the artist strives in his work to convey a subject outside of historical time and space and "... push through to ... reality" for the wellbeing of humanity, his gorgeous paintings nevertheless exist in a socio-historical context to which they, inevitably, must account. Yigal Ozeri has exhibited extensively throughout Israel, Europe and the United States, and his work can be found in many prominent collections, including Albertina Museum, Vienna; Hudson Valley Center for Contemporary Art, Westchester; Kennedy Center for the Arts, Washington DC; McNay Art Museum, San Antonio; Nerman Museum, Kansas City; Scheringa Museum of Realist Art, Netherlands; Tel Aviv Museum of Art, Israel; and The Jewish Museum, New York.