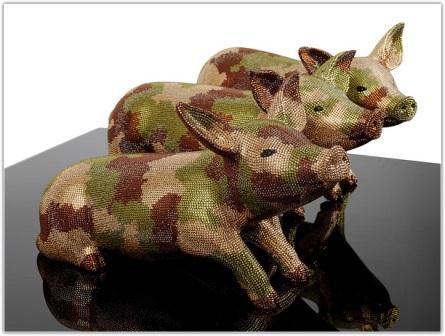 Mauro Perucchetti adapts from the fable of The Three Little Pigs to aid in his artistic practice. The story instils morals about our demeanour and attitude towards responsibilities, admonishing us to be proactive in life down to the small details. Maura redefines this notion in his work by coating the pig’s entire body with Swarovski crystals over earth tones, a conceivable reflection of people today who pursue material appearance instead of sensible virtues. The earth tones correspond to camouflage patterns used by the military to conceal themselves, a suggestion of Perucchetti’s pigs trying to hide from imminent reality in disguise. He questions the mass culture today, the phenomenon of people obsessed with false cover.