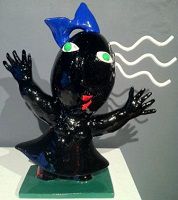 CSS American club (from March 2019) In his sculptural work, Ripolles' inspiration comes from both man and nature. Totems, animals, and human forms that could only exist in the imagination of a creator come to life in his collection, in a naive and carefree existence, far removed from dramatism. One of the distinguishing elements of Ripolles' sculptures is that practically all of his creations have a double frontal plane. They all have two faces, two expressions with which Ripolles represents the duality of man's emotional existence, condemned to live between suffering and jubilation. His sculptures come in a variety of sizes, of which those in large proportions pay tribute to the greatness of life. An excerpt from a well-known parable promoting good attitude and positivity: "There once was a woman who woke up one morning, looked in the mirror, and noticed she had only three hairs on her head. "Well," she said, "I think I'll braid my hair today." So she did, and she had a wonderful day."

One of Spain's finest and most renowned artists, Juan Ripollés was born in September 1932 in Castellón, Valencia, where he currently lives and works. Overcoming a traumatic childhood and troubled youth, the artist eventually rose to immense success, his artistic style often compared to that of the iconic Pablo Picasso. A critically acclaimed sculptor and painter, the artist has won numerous awards for his distinctive works and has exhibited extensively all over the globe, from all over Europe to a multitude of cities in Asia and the USA. The artist is currently one of the most prominent figures in modern contemporary art.