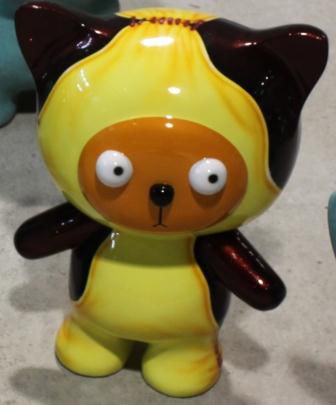 The characters produced by Noh are imaginary characters, similar to manga ad anime. Noh’s characters are products of his own imagination and creativity, not through inspirations by other existing characters or icons. However, Noh also uses animals as a basis of his works. The animals are a reminder of the lost hopes and dreams that have been replaced with our worries and challenges, a recollection of our innocence and childhood play, an attempt to prompt creativity in his viewers. Noh goes through a thorough process of sculpting each of his characters, perfecting each carve, chisel, and curve, refining and polishing his sculpting. Each of his character is original and without any repetition.

Born in 1969, Korean sculpture artist Noh Jun attained his Bachelor's, Masters and PhD in Sculpture from the Seoul National University, and gained much of his work experience in the entertainment industry. Noh was able to create unique and child-friendly characters such as Clo and Dappy. This was mostly because he was an emcee at a children's cable channel at Daekyo Broadcasting Station and worked with clay animation for television for a long time. Presently, he is a lecturer at the Seoul National University and Kyungpook National University. Noh's work has been exhibited in Japan, Korea, Hong Kong and USA. In 2006, he was awarded the Grand Prize for the 6th Song Eun Arts Award at the Song Eun Arts & Cultural Foundation and the following year, won the Special Selection for the 7th Moran Sculpture Award at the Moran Museum. He attained the 19th Kim Sejoong Young Sculptors Award at the Kim Sejoong Commemoration Association.